Help make vivid the interconnectedness of giver, receiver, and gift.

This has been a year of wholehearted Soto Zen practice at Ancient Dragon Zen Gate! I am writing today to ask for your essential gift to support the temple and to bring you up to date on this year’s milestones and activities. Your generous donation is important, as our end of year campaign accounts for at least half of our yearly income. Your help is necessary for us to maintain the temple space, provide authentic Soto Zen program offerings, and offset our administrative and teaching costs, and is especially important this year, as we are on the verge of renegotiating our lease. Accordingly, we have set a goal of $60,000 for the year-end campaign. In support of that goal, generous donors have made $24,000 in matching donations that will help your donation go twice as far. 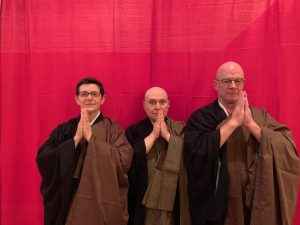 Three milestones this year have demonstrated the strength of practice and maturity of our community. In January we marked Ancient Dragon’s tenth anniversary at our Irving Park Road storefront temple. The celebration included reflections by some of Ancient Dragon’s founding members. In August, Taigen, Eishin Nancy Easton and Nyozan Eric Shutt, with the assistance of Shosan Victoria Austin from San Francisco Zen Center, completed ten-day Dharma Transmission ceremonies that authorized Eishin and Nyozan to teach Zen as Taigen’s successors. Finally, Taigen was able to enjoy a six-month sabbatical, authorized by our Board of Directors to permit Taigen to pursue rest, renewal, study, and writing projects after his twelve years of leading Ancient Dragon. Led by Eishin and President Douglas Floyd, Ancient Dragon’s practice leaders and many other sangha members continued to offer Zen teaching and practice during Taigen’s sabbatical, including monthly all-day sittings. Shudo Paula Lazarz conducted regular one day QiGong and meditation retreats at Ancient Dragon and monthly Full Moon Bodhisattva Vow ceremonies at her Health Kick martial arts school.

Taigen resumed his teaching role and led a three-day sesshin in October after returning from his sabbatical. He will again lead the five-day annual Rohatsu sesshin in December.  His new teaching focused on the Soto Zen founder Dogen’s primary practice teachings, but also on the prior poetic and aesthetic background of Japanese Buddhism that informs our practice and which is rarely spoken of in American Zen. 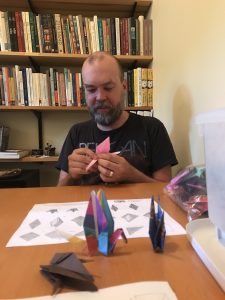 In March, Taigen performed a lay ordination ceremony for Head Doan Dylan Toropov and Work Leader Jason Carey-Sheppard. The sangha held its third annual Camping Sesshin in June, in a temporary zendo erected at Illinois Beach State Park. In August, members of the sangha began to fold paper cranes, a traditional symbol of peace in Japan, in response to a call from Soto Zen priest and scholar Duncan Williams for assembly of 40,000 cranes in support of immigrants being detained at the United States southern border. In September, sangha members Douglas Floyd, Hogetsu Laurie Belzer, Nyozan Eric Shutt, and Dylan Toropov traveled to Racine, Wisconsin, for a conference of Branching Streams, a network of American Zen temples in Shunryu Suzuki’s practice lineage. 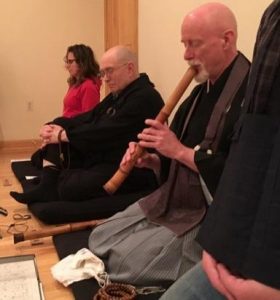 Zen priest and Unitarian Universalist minister in Champaign-Urbana, spoke twice at Ancient Dragon about how our practice can address environmental concerns and also about the “ferocious grandmothers” in Zen history. Tova Green from San Francisco Zen Center and liaison for Branching Streams spoke in September, and Ben Connelly from the Minnesota Zen Meditation Center spoke in October on his new book, Mindfulness & Intimacy, integrating mindfulness practice with a Mahayana perspective.

We rely entirely on the gifts of supporters like you to continue the practice of Zen in the Shunryu Suzuki lineage in Chicago. I would like to thank you for your generous donation. Please consider making a $500 gift today in support of our efforts. Any donation will be gratefully received.

With humble thanks for your donation, 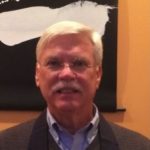 Ancient Dragon Zen Gate is an IRS recognized 501(c)(3) nonprofit organization. A copy of our IRS Determination Letter is available upon request.  Please speak with a tax professional should you have any questions regarding the deductibility of any donation.